Pro road racing cyclist Connor Swift is all smiles during his visit to St Hugh’s Hospital – and wouldn’t you be smiling if you were racing in the Tour de France! 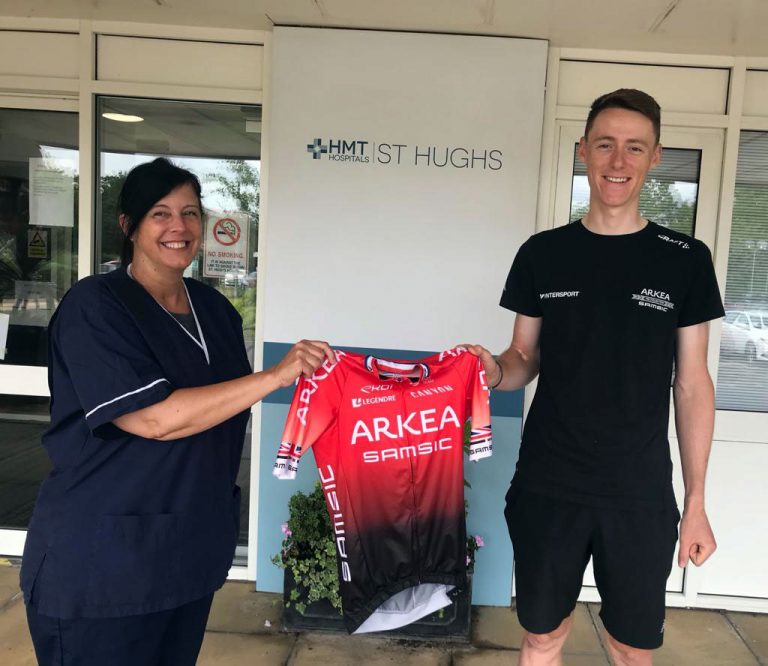 Connor visited us to have his bloods tested for his cycling blood passport before he takes part in the famous race beginning on Saturday.

He rides for the French team Arkea Samsic and made his tour debut last year – his first season with the team. In 2018, he won the British National Road Race Championships. And it runs in the family – his cousin, Ben, is also a professional cyclist.

Connor, 25, from Thorne near Doncaster, told us: “I am super happy to be riding the tour again after my first time last year! It’s the biggest cycling race on the calendar and if you talk to someone who doesn’t know anything about cycling, I would put money on them having heard of the Tour De France. The history of the race is huge and to be there is just a dream come true.

“My job now is at this level. So to start with when I first became professional these big races would be a little daunting, however, now I am racing with these guys pretty much week in and out, and therefore I wouldn’t say I get super nervous anymore. However, on the start line on Saturday that may be a little different as the TdF is just huge! Before the race on the bus we will have some music on etc., and that takes your thoughts away from the racing.

“After I will have some time at home to recover and then rebuild. I will be looking to race in Norway and then some other stage races before hopefully racing the Tour Of Britain in September followed by some big objectives in October, which include Paris Roubaix, Paris Tours and the Nationals.”

When Connor was younger, it’s fair to say he wasn’t especially into riding. He said: “My cousin was a professional when I was young, and I wasn’t into cycling much. I have always played lots of different sports growing up and then when I turned 15, I got into triathlons for a few years before progressing onto only cycling. When I started to focus more on the bike, I wanted to one day race the biggest races I can.”

So how does Connor take time out? “Normally we will go on a nice dog walk in the Peaks somewhere or take a day trip – which may include camping the night. I am pretty much active all the time and don’t really like to sit still, so some table tennis might be thrown in there too ha-ha!”

We have helped Connor for many years now, since he was on an elite cycling team which was supported by St Hugh’s. “I am very grateful for this support,” said Connor, “which mainly includes my quarterly blood tests to make sure everything is okay and there is no underlying issues. In addition to this, cardiac scans before the season commences. The hospital has a great friendly atmosphere and it’s always super professional and quick and easy to visit.”

It’s clear he’s thrilled to be taking part in the prestigious race… who wouldn’t be?! We are so excited for him too and pleased to be able to play a small part in his career. All the best for Saturday and beyond, Connor!