‘It’s more of a calling than a job’

When Beverley Pexman swapped working in a supermarket for the caring profession, she knew she’d found her vocation. And when she joined St Hugh’ Hospital as a housekeeper, little did she know that in a few short years she’d have a degree and a job in nursing.

The 46-year-old is this year marking a decade working at the hospital, in a role she describes as her ‘dream job’. “I used to be on the Tesco bakery night shift, then on the shop floor and home shopping,” she said. “I sat down one day and thought, ‘no, I need a change’ and went into the caring profession. Since then, I knew that was for me. I did home visits and also worked at a care home, but always wanted to get into support work but St Hugh’s Hospital didn’t have any such vacancies at the time, so I joined the bank as a housekeeper. I needed a full-time job and was offered a position in the kitchen, so I accepted and saw it as a foot in the door to the career I’d like to achieve. This was in 2011. 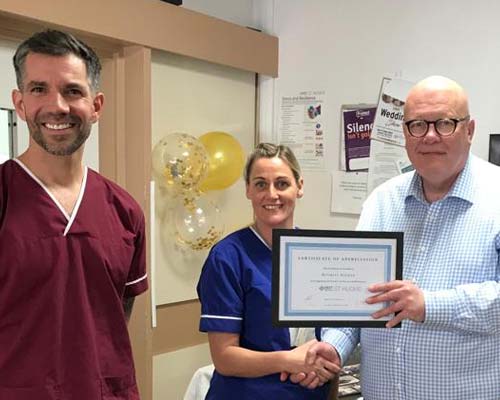 “I’d never even thought about nursing at that stage – a carer, yes, but not a nurse. So, I worked in the kitchen and asked the then hospital director to see if there was any support work available as well as my existing job. She said yes, but that it was only night-time, and that was fine for me, so I did the odd night, which led to a day shift and then one day the director came to the kitchen and said she’d like to have me on the front line. In a nice way, the kitchen didn’t want to let me go, but I was getting good patient feedback, which is lovely; you don’t expect things like that. But the director explained that the feedback was so positive that she wanted me to change roles and I was offered a six-month contract as a support worker on the ward.”

Bev then completed a year’s training at Grimsby Institute on an access course while working at the hospital as a support worker. “I didn’t get high grades at school, and I’m dyslexic,” she explained. “All through school, it wasn’t recognised. It was tough; I wasn’t a naughty kid – I just couldn’t grasp and take in the work, and they just thought I wasn’t interested. My mum even took me to see a specialist about it when I was quite young, but nothing was done, and as a kid, I didn’t know, really.

“It was only when I went to the Institute when I realised that I had an issue, and they did too, so I had some assessments and they showed that I am dyslexic and dysphasic, and that I also have dyscalculia. I had to deal with that on my own for all that time – it was only as an adult that I realised it wasn’t just me. I’ve still had a tough time of it, despite the diagnosis; I’ve come home in tears, thinking I couldn’t do it, but in a way that urged me on to overcome it even more! Never mind that I was almost 40 when I started and had to re-learn how to be in education and train my brain again.

“I’ve never been academic… it’s so hard getting back into it, especially when you really want to do something but know it’s just not going in. The diagnosis was a relief, but it was scary at the same time because it made me doubt how I was going to pass the course. I felt sick all the time – things would just go in one ear and out of the other.”

Despite these challenges, Bev passed the course and embarked on a three-year full-time nursing degree at the University of Hull, supported financially by St Hugh’s Hospital through a wage and also a bursary. While not actually at university, Bev worked at the hospital.

She said: “At university, the lectures were so high-speed and quick that I couldn’t write notes fast enough, so I used to record them and then come home and listen to them all over again, sometimes more than once. It felt like double the work and was tiring at times. But I did it! It was like a whirlwind.”

Bev qualified in October 2019 and graduated in January 2020. “Lots of people say I’ve done well but I’m not one of those people,” she said. “I know it’s an achievement and I’ve worked extremely hard but it’s just one of those things where I don’t see it how others do… I can’t believe I’m a nurse. I had such a strong desire to get to where I am and get through the education, and it’s more of a calling for me than a job, so it’s a case of ‘this is just what I do’.To me, it’s normal – but it is my dream job! 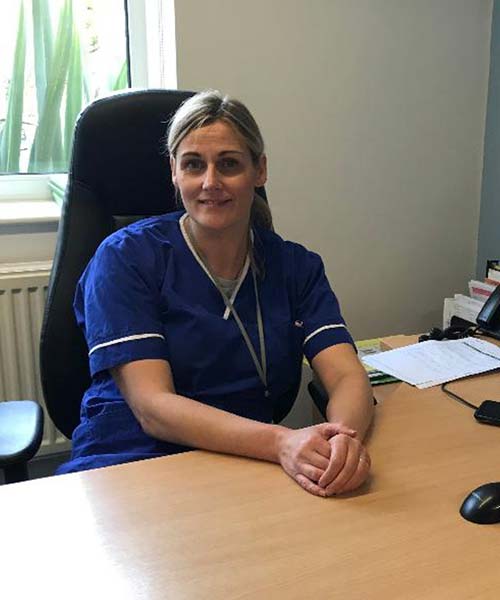 Bev is currently a pre-assessment nurse. She returned from university to work on the ward and only joined the outpatients’ pre-assessment team to help out in the short-term… instead, she proved so adept at the role and enjoyed it so much that she stayed. “It involves the patients coming in for their consultations and pre-assessing them,” she said. More recently, she has been acting as team leader, enjoying taking on the extra responsibilities that comes with stepping up.

Bev’s career is clearly a passion for her, but she also has a very full family life. She met Neil at secondary school in Grimsby. They were in the same year, and their birthdays are two weeks apart – and they later married in Las Vegas. “I was mad on him,” she recalled. “He was the best-looking lad – and still is. We got together when we were 14 years old, split up at 16 but got back together again, and then I fell pregnant and had Lewis when I was 18, nearly 19 – very young, only had the one, and we’ve never looked back. Lewis is 28 this year and he has a son of his own, a grandson I adore. Neil and I are very much enjoying our life now; we work hard but enjoy it.”

Back to her career, and at the moment Bev has achieved everything she wants to and has no current plans to go back into education. ”I am so happy right now,” she added, “but it’s in my nature to want to continue learning and using my skills to the best I can. Working with patients, and seeing them achieve what they want to achieve, is a fantastic feeling.

“St Hugh’s Hospital has given me so much confidence, and belief in myself. I’d like to say thank-you for that support.”

To find out more about career development and training at St Hugh’s Hospital, visit hmtsthughs.org/jobs-in-grimsby