It’s time to celebrate! Our head porter, Nick Walker, has been awarded a globally recognised certificate. 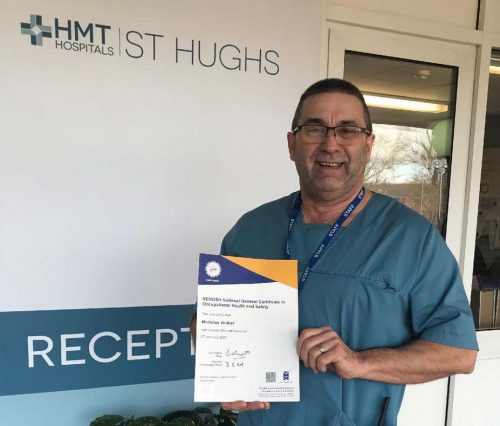 Nick’s dedication and hard work means he is now the proud owner of a NEBOSH National Certificate in Occupational Health and Safety.

The awarding body (short for the National Examination Board in Occupational Safety and Health) exists to underpin, maintain and raise the competence of professionals.

Nick is a familiar face at St Hugh’s, having worked there for seven years, and some of you may know him from his previous career as a firefighter.

“I got the position here after being cheeky following a total knee replacement at the hospital,” he explained. “I started out as a bank porter, then took the role full-time, and then was promoted to head porter.”

It just proves Nick was in the right place at the right time – knee replacement aside,  as he has gone from strength to strength in the role.

He joined the fire service at the age of 18, “an absolutely incredible service to be part of”, he said, and went on to complete 32 years of service. He started out as a firefighter, serving at numerous stations around the Humberside service area

“I have attended numerous serious incidents, both as a firefighter and as an officer in the service, and also numerous non-critical incidents,” he said. “The camaraderie and the level of intensity in the service really defined one’s own character while working with a very close community.

Nick eventually retired from the service in 2011, and later joined St Hugh’s – and has proved his dedication once again.

“The NEBOSH exam is a very in-depth health and safety course, and not having studied for a number of years I found that side rather difficult to start with,” said Nick. “While attending a two-week training course, I had to get focussed and do extra studying each night to help with the coursework.”

The pandemic had an effect, too. “Following a clerical error and NEBOSH providing the wrong paper for one of the exams, in a new format which nobody had studied for, NEBOSH decided that everyone could resit at no extra cost at a later date. Then the pandemic hit, and the exam was put back until October 2020, which meant further studying each night for me to keep up with the course criteria.”

But Nick didn’t let a small hurdle like that get in the way of achieving his national certificate.

“This means I can support St Hugh’s as an organisation and individuals as a trained and qualified Health and Safety Officer,” he said. “The most rewarding aspect of my job is being able to provide support, and solve issues in a pragmatic and logical way, with the backing of the qualification, to achieve the best outcome.”

Outside work, Nick follows the discipline of Aikido Martial Art, which he has studied for a number of years. He also studies other martial arts and has gained Dan-grade qualifications in other disciplines, but his current focus is attaining the same rank with his Aikido club.

When Covid-19 guidance allows, he also enjoys cross fit four times a week, as well as cycling to keep fit. “I have completed a few long-distance cycle rides to raise funds for charities,” he said, “and St Hugh’s have supported me over the years.

“I also like to participate in motorcycle riding and touring with a group of retired firefighters when the weather is kind to us. We are just fair-weather bikers now we are all not as young as we think we are!”

Well done on your award, Nick, and here’s hoping for some better weather for you and your friends.