‘It’s changed me for the better’

It’s something we say a lot: deciding to undergo surgery is a big deal. For Lisa, it was the right time – and St Hugh’s Hospital was the right place – to take that step.

“My journey began when I lost some weight,” said the 49-year-old, who lives a 45-minute drive away from the hospital, in the Lincolnshire Wolds.

“I’d always been 13-14 stone and then changed jobs, stopped drinking, and eating as much, just lived a bit more healthily. I still eat cakes and chocolate and go out for dinner, but I monitor it more than I used to – especially now, post-surgery. Now I’ve had the procedure done, it’s made me even more determined to keep this up.”

In all, Lisa lost three stone in weight over six months. She goes to spinning classes three times a week, too.

“My breasts always been alright but then I lost the weight and that changed them,” she said. “I just kept looking and looking and thinking ‘no’, but I didn’t really mention it. I’d think, ‘you’ve lost all this weight and done so well but this is not right’. It’s always been that if I ever lost any weight, it’d come off my boobs first, and then if I put any on, it’d go back there.

“Then one day it just hit me. They were so flat, and my nipples were pointing down. I was horrified. You don’t get told – or rather it’s not talked about much – that after dieting you’ll still have the same amount of skin left, just not the tissue inside. It’s a weird thing to be left with. 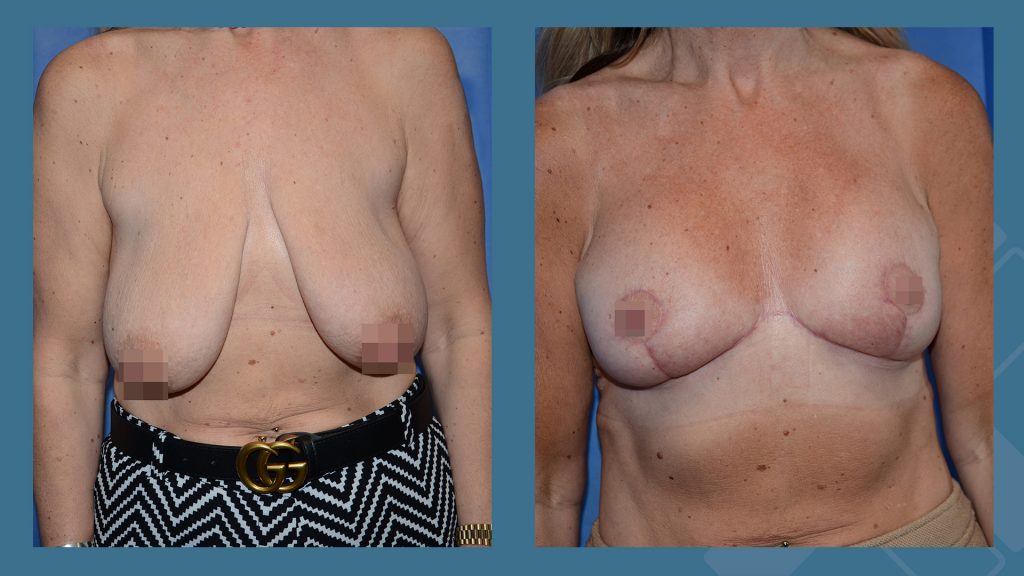 “I said to my husband ‘just look at them – I’m going to look into having something done’. I spent hours and hours researching it, questioning where to go and who to choose. Harley Street naturally comes to mind, and other people were saying they’d had theirs done at this particular place or that particular city… it was quite overwhelming.

“Then, my best friend – who was also considering the same procedure – said she knew someone who’d had surgery with Mr Muhammad Riaz at St Hugh’s Hospital and that he was highly recommended.

“We both went together to Grimsby for our consultation, which was nice. As soon as we spoke to Mr Riaz and Sarah, the hospital’s cosmetics sister, we knew this was the right choice. Some people suggested going for a second consultation or a second opinion, but we were so comfortable with Mr Riaz, Sarah, and St Hugh’s that there was no doubt in our minds. He put us at ease straight away; I never thought of going anywhere else.

“So, I had the consultation and I said, ‘get me booked in’. That was it, really!”

Lisa’s surgery date was scheduled for just a fortnight later – “it was really quick,” she said, “no waiting at all” – and with the full support of her family, underwent a breast uplift.

The procedure used all of her own tissue to recreate shape and definition; no implants were required, much to Lisa’s delight. 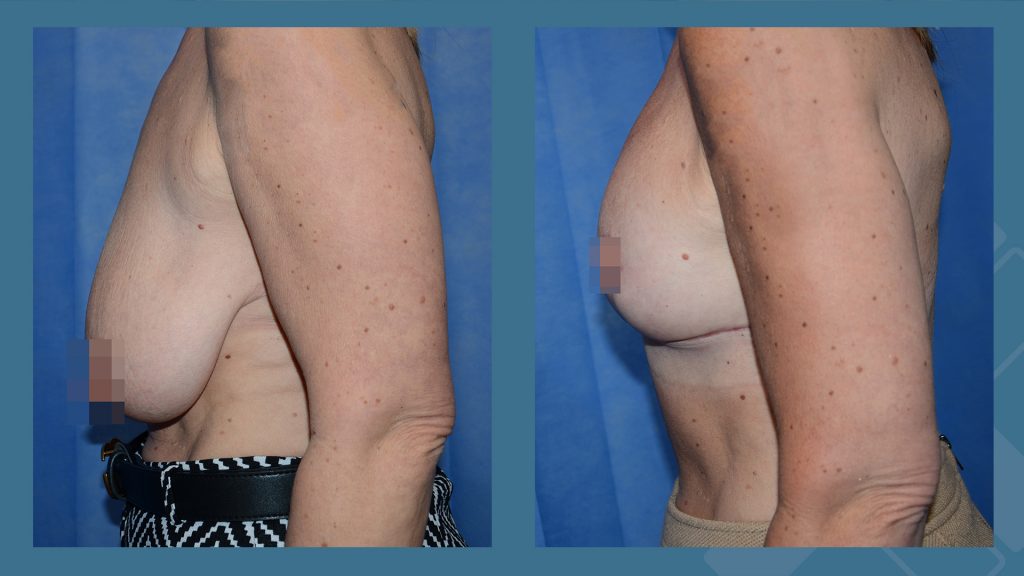 “I just assumed that’d be the case,” she said. “I thought I’d need an uplift with implants because I thought there was nothing there to work with! When Mr Riaz explained that I wouldn’t need implants – only my own tissue – I couldn’t believe it. He almost straight away said ‘no implants’, within moments of examining me, and explained the risks of having something that’s not organic inside one’s body. He was very clear about that. That’s not to disregard implants, because they do their job, but to achieve what’s been achieved without needing that is amazing.

“The difference between the before and after photographs is incredible, really – within a week of having the surgery, I noticed a difference. It’s so impressive.

“Having this done has made my body change shape completely; I know it sounds funny, but it was like I’d had an entire body revamp – when a friend of mine saw the results, she said I had the figure of a 16-year-old. I don’t know how or why but everything appears uplifted. It’s weird – in a good way! – going clothes shopping now. It’s changed what clothes I can wear. Before I was a size 14-16, sometimes an 18. I went shopping with my teenage daughter and I was the same size as her… fitting in size 10s and 12s. I’ve got so many clothes now that I can get into… they’re probably a bit too big now! It’s just amazing! 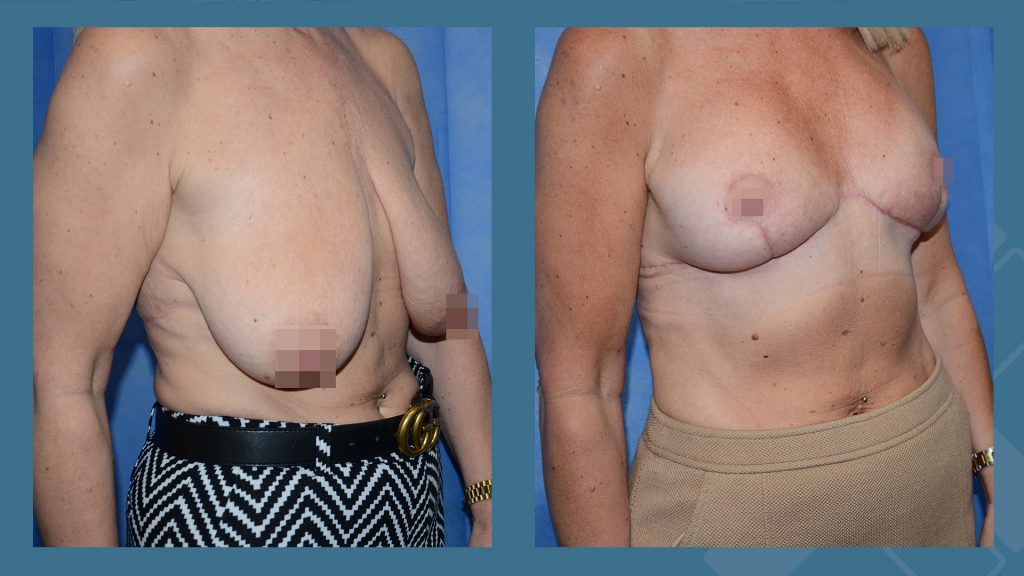 “I’ve never had anything like this done, ever, and I swear it’s the best thing that’s happened to me. I was nervous, I will be honest, but then so are most people, I should think, because surgery is a massive step to take.

“My husband is over the moon… my family really have noticed a difference in me, not only my appearance. I’m looking after myself now. Even my posture is different… I’m more open now, more upright.

“It’s also brilliant that St Hugh’s Hospital is local to me. It’s like having a security blanket, knowing that if I need anything, the staff are there to help. The short distance away from home, too, was a massive bonus!”

Lisa’s best friend has since had surgery with Mr Riaz too, and now they are enjoying the rewards.

“It’s not about vanity,” Lisa added. “Cosmetic surgery is about self-care and self-improvement, and self-esteem. It’s not different or unusual anymore; in my view it’s as common as getting your teeth whitened.

“Thankfully for me, paying for the procedure wasn’t an issue but if it had been, I can assure you I would have got a loan. It was the absolute best thing I’ve done.

“I like what I see in the mirror now. I don’t want to go and get my body out and show off to everyone, or have big boobs – this is for myself, alone. Mentally and physically, it’s changed me for the better.”

Find out more about what treatments St Hugh’s Hospital provides here and about Mr Riaz here.