Triobike: Riding along The Prom

The sun was out on Cleethorpes’s North Prom and the wind was up, making for a bracing but still lovely trip out on the triobike.

As reported, the specially adapted bike we purchased, which has room for two front-facing passengers, is used to get members of local charity Friendship At Home out and about.

This time round, we travelled along the North Promenade, taking in the sights, sounds and smells (think chip shops and candyfloss!) of the seaside.

First up, piloted as always by Gary from St Hugh’s Hospital, were Carol and Barbara. They’re both relatively new members of the charity. 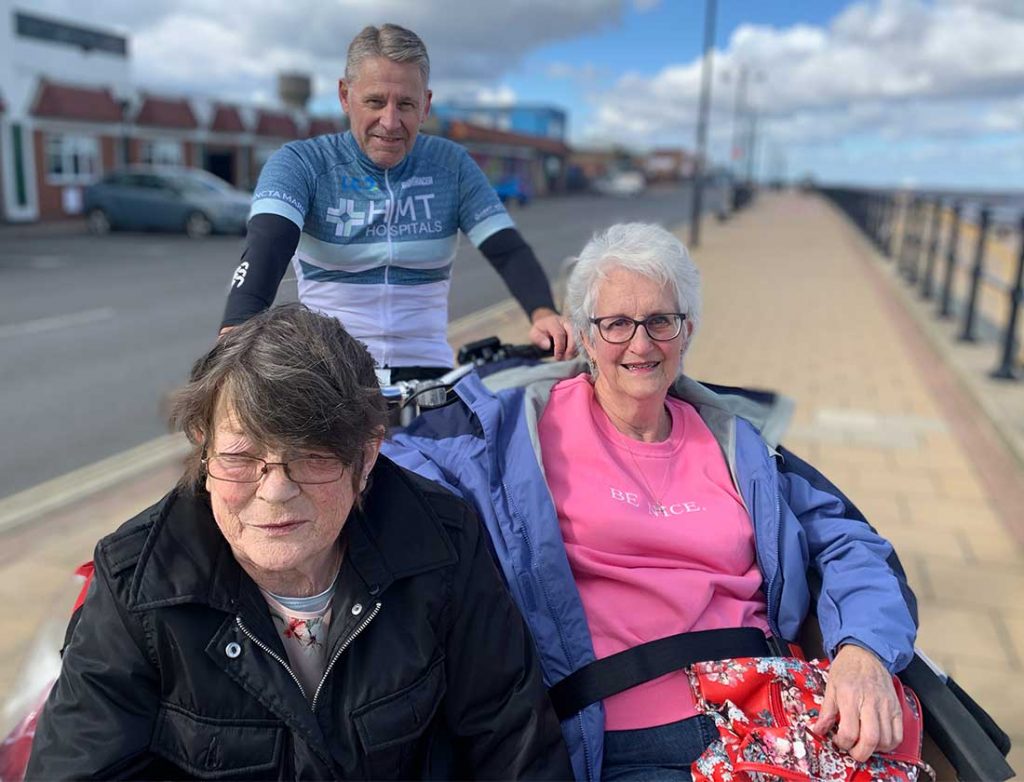 Carol, 78, lives in Cleethorpes and was born there within sight of the sea, so very much enjoyed not one but two rides on the triobike.

She recalled tap-dancing on Cleethorpes Pier aged five at the East Coast Dance Festival. In later years, she volunteered as a bedside visitor at Grimsby’s hospital for eight years. She’s also a former singer of the well-known local choir, the Humber Belles.

“Before the pandemic, I did everything – keep fit classes, line-dancing… then everything stopped because of the virus,” she said.

“It was awful. I’m a people person and I found that very hard.

“About six months ago I moved house to near Friendship At Home, and they have provided me with everything I lost. It’s brilliant.

“As well as a member – I attend the choir and I’m trying out keep fit – I’m now an approved befriender myself, and I will be very proud to wear my special badge. It was meant to be that I joined.”

Carol is used to leading an active life; she has been on many cruises and has booked one for around the coast of Britain next year. At 75-years-old she completed a wing walk, raising £2800 for another local charity, When You Wish Upon A Star. “Although,” she said,

“I’m not far off 80 now and my family have made me sign a letter promising I won’t do anything so daring!”

She was also full of praise for St Hugh’s Hospital, having stayed there twice to have both knees replaced.

“It’s a five-star hotel – so luxurious, with brilliant food,” she said, “and excellent staff.

“Thank you so very much St Hugh’s for providing this wonderful treat. The triobike is fabulous!”

Her companion Barbara, 67, from Grimsby, is also a new member – in fact, this triobike ride was the first trip out she’d made socially since the Government-imposed lockdown rules ended.

“I got involved with Friendship At Home through the scheme where they loaned members tablets to keep in touch virtually,” she said.

“If I hadn’t had that tablet, I would have spoken to no one through the lockdowns. Now I’m starting to do other things and get out and about.

“I’d recommend anyone thinking about it to get involved with Friendship At Home. Just get in touch.”

Next up for a trip along the bracing seafront were Dennis and Kath, from Grimsby. The married couple have only been members of Friendship At Home for a couple of weeks or so. 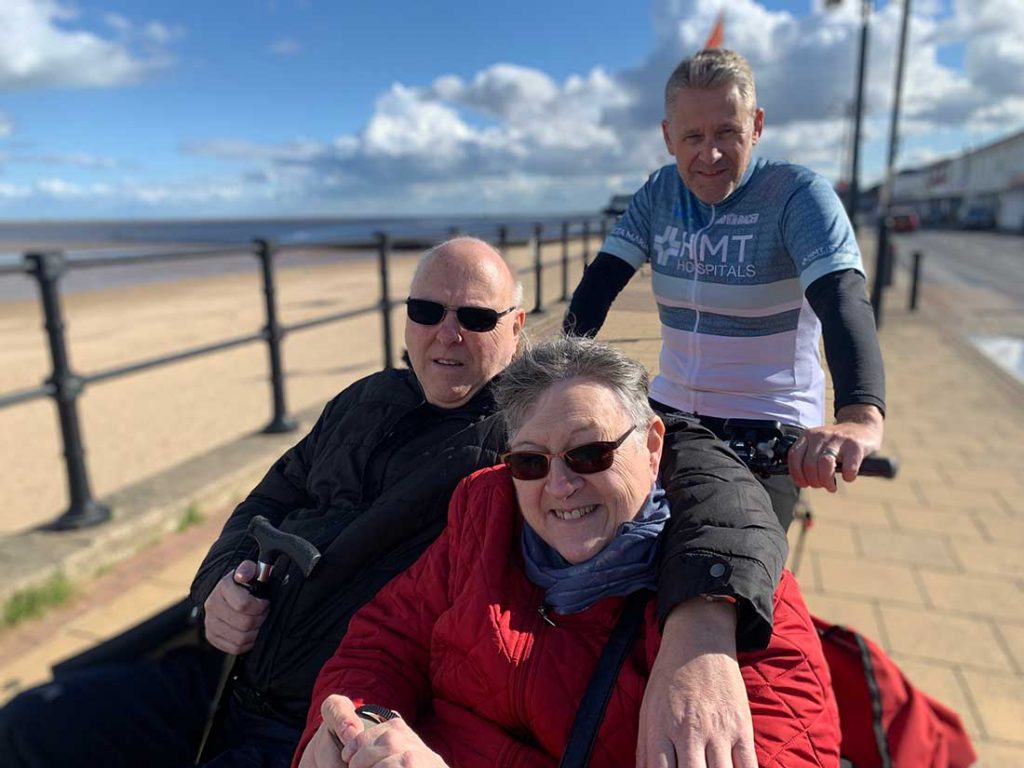 “Everyone is very friendly,” said Dennis. “They talk and listen – and listening is so important.

“We are very much enjoying being outside today and enjoying the autumnal scenery!”

Jack, 73, was accompanied by Carol on his ride on the triobike. Jack was born in The Humber public house, where his father was landlord. During his working life, he lived all over West Africa, managing fishing companies.

He has been a member of Friendship At Home for three years.

“The secret is to walk every day, exercise, and have a good pint!” he said.

Our final passengers for this session were Laraine and Ron, from Cleethorpes, who have been married for 60 years and are Friendship At Home founder members.

“It’s nice to meet different people,” explained Ron. “Together we go to bingo and take part in the quizzes.”

Ron, among other jobs, was a policeman for a large part of his career and is originally from Scotland. Laraine was a receptionist at St Hugh’s Hospital when it was based in Princes Road, Cleethorpes, before it moved to its current home in Peaks Lane, Grimsby.

The couple met when Ron was on National Service and Laraine worked on his RAF base in Norfolk, where she is originally from.

Take a look at the St Hugh’s Hospital Facebook page for a photo album of the triobike rides. If you think Friendship At Home may be able to help you or a loved one, call 01472 602500 or visit www.friendshipathome.org.uk. You can also find the charity on Facebook here – www.facebook.com/friendshipathome

As always, we’d like to thank the booking office at Cleethorpes Railway Station and TransPennine Express for storing our triobike and arranging access when we need it.