For eighteen-year-old Libby Tice, there was never any doubt that one day she would go under the surgeon’s knife for a rhinoplasty. 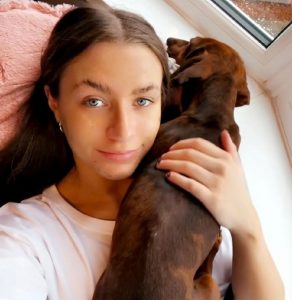 Even at a young age, she told her schoolfriends how when she grew up, a ‘nose job’ was the first thing she’d do… and she wasn’t wrong.

The nose is a central feature of the face and, for Libby, although she had no issues with her features straight on, she disliked her nose in profile.

“I’ve always hated my nose, since I was 13 or 14 years old,” she said. ”It runs in my family to have a big nose, and we always laugh and joke about it, but a rhinoplasty is always something I wanted done.

“My dad, Paul, he’s always wanted one done too. He said he feels too old to have it now, but because he knows how it feels to want it so badly, he always said to me growing up, ‘if you still want one when you turn 18, I will pay for you to have a rhinoplasty.’

“It wasn’t for anyone else or to look good for other people. It’s literally because I’ve hated my nose.

“I was such a young age when I knew I wanted this. At that age, you start to notice things about yourself, and how you look, and how other people look. I got into fashion and make-up. That’s when I remember starting to feel a bit self-conscious.

“I think it’s because at that age you’re in Year Nine at school, and it’s the time when you start growing up a bit and when things like image, and how you look, can become a thing. For me, it was when I began to take more care in my appearance. That’s when I started realising I disliked my nose.

“The thing is, it’s not the case that when I was in school, anyone used to say anything about my nose. No one has ever said that I had a big nose. It was literally a personal thing. It was just when I looked at myself, I didn’t like it.

“I just got on with it and forgot about it – sort of. When you’re 15, or 16, there’s nothing you can do about it anyway, is there? So I just put it to the back of my mind. But it’s a long time to live with something you don’t like. I knew, even back then, I wanted a rhinoplasty. The thought was always there but I’d never really mentioned it.

“So as I got to 16 years old, that’s when I began really thinking about it more. That was my turning point, really. And when I was getting towards the back end of 17, I started thinking, ‘oh, I’m going to be 18 soon’, and then it was all I could think about. I was just so excited about the idea, and my dad saw through on his promise!”

Libby lives with her parents and brothers and had their full support – eventually.

“My mum, Tracy, and my brothers initially didn’t want me to go through with it, because they are big advocates of being just the way you are. They’d say, ‘you look fine, there’s nothing wrong with your nose’… stuff like that.

“But they understood how I felt and knew how much I wanted this done, so supported me when it came down to it. It’s the same with all my friends from school. I would say all the time, ‘I’m going to get a nose job when I’m older’, so the fact that when I turned 18 and had it was no surprise at all. They knew I’d been saying it for years. It wasn’t a shock, and that just shows how important it was to me.”

Libby’s boyfriend, Billy, was the same. He liked her just the way she was but was very supportive and completely understood her decision.

“I did a lot of research, but not around the actual operation until a few weeks before. I watched a few videos on YouTube and thought, ‘oh, is that really going to happen to me’, but before that, I knew all about the healing processes and stuff like that.

“I used to always look at before and after nose job photos. Once, my dad told me to make sure I looked carefully into it and that it was something I really, genuinely wanted to go ahead with. That’s when I started researching it seriously, and more so after I had my first consultation.”

Libby’s surgeon, Mr Muhammad Riaz, has worked as a consultant plastic and reconstructive surgeon since 2001. She already knew about his excellent reputation through her job at Grimsby’s Diana, Princess of Wales Hospital. She works there as a customer service apprentice and is due to complete her training in May.

“I felt much more secure and safe in going ahead with it after seeing Mr Riaz,” Libby said. “Rhinoplasty is a big deal, and a big decision to make – it is a forever change, after all. And trust is such a big factor too. Mr Riaz is spoken of so well.

“For me, I don’t know why but I never really got that scared about not liking the result. I think it’s because I’ve always been completely fine with the way my nose looks from the front – my dislike was the side profile.

“There’s probably not much that can go wrong with what I had done, because mine was literally just shaving down the length of my nose, with no other kind of reshaping.”

When the time came, St Hugh’s Hospital was her first choice.

“Many people travel to cities for cosmetic surgery, and I don’t quite know why when we have St Hugh’s so close to hand, with excellent, highly qualified consultants. I did look into St Hugh’s and discovered how good the people there are.

“To be honest, at first I thought, ‘right, let’s go for my first consultation and take it from there’, but that first time I met Mr Riaz, I could just tell he knew exactly what he was doing. When he explained it, I knew I didn’t have to look elsewhere or research any further. He was so good, and so were the other staff too.”

As Libby lives in Grimsby, she was only minutes from home for the entire time she was at St Hugh’s – her first ever in hospital for medical reasons. Not only did this cut down on travel time and expense, but it was also a comforting thought – during the coronavirus pandemic, patients are asked to attend alone, and visitors are not allowed.

St Hugh’s is proud to be a designated Covid-secure ‘green’ site. The hospital has been divided into zones to prevent cross-infection, and every step is being taken to protect patients and staff. Regular testing, for example, is undertaken by all staff on site, and people coming in for surgery too. Where possible, appointments are being carried out virtually, again reducing the risk to patients as well as the people who work at St Hugh’s.

“Having no visitors was the only rubbish thing about having surgery in the pandemic,” she said. “I lay there all night afterwards with this wadding on my nose, and I couldn’t breathe, with no visitors to keep me company.

“It felt like a long time, especially because I’d never been in hospital for anything medical before. That was my first time.

“But that’s why St Hugh’s is so good – it feels different to other hospitals. It’s more homely.

“In terms of Covid, I felt safe the entire time. I had a buzzer next to my bed, for any time I needed a drink or to go to the bathroom. After the operation I had a pot on my nose and things on my legs to help with circulation that occasionally I needed help with unstrapping, so I would just ring, and nothing was too much trouble. They were always so, so helpful and nice.

“Even beforehand, and even though I wasn’t nervous, they were all making conversation with me, to make me feel at home and take my mind off the operation.

“One of the nurses said she had never seen someone so excited at having an operation before! It meant so much to me.”

Part two coming soon…
Libby talks us through her recovery, and life after her much-desired rhinoplasty.

© Copyright HMT St Hugh’s. Unauthorised use is not permitted.